Setting up ES6 on your NodeJS app has never been easier! Using ES6, also known as ECMAScript 2015, you can use syntax features such as import and export that make your Developer life easier.

As of 2020, the ES6 setup for me is a lot faster. Back then, it was so intimidating because there were so many steps and Babel modules. But lately, you pretty much just need 4 Babel modules, a package.json file and Nodemon.

Disclaimer: This is not the only way to setup ES6. But I find this one to be easier and faster for me to get started!

Let’s start by making a super simple and small NodeJS app. For this example, this app will be some type of REST API. So, we’ll be using Express and Cors for the essentials.

All the development files will be in this server folder.

Sidenote: This can be a good file structure; Having a folder for all development files, a build folder for generated files ready for production, and a test folder for some unit testings.

The command npm init will prompt you with the usual questions for creating a package.json file. 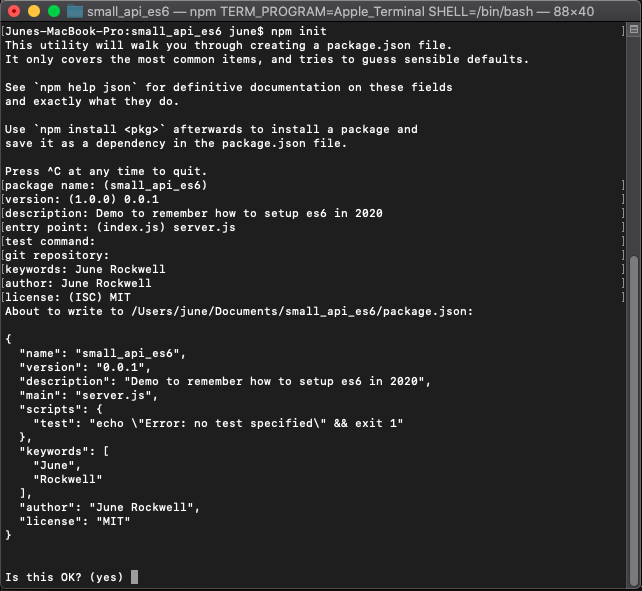 As stated earlier, this will be a small app. To create Node REST API, ExpressJS is one of the popular modules to use. But there are some well maintained modules out there like RestifyJS and FastifyJS. I usually use RestifyJS as long as I don’t need to serve HTML files. Lastly, we have to remember to setup some basic CORS. And, we can conveniently do that using the Cors module.

Inside the server folder, create a server.js file.

And if we run the code (type the command node server), the app won’t run because of a syntax error.

We need to setup Babel for this small API app in order to use import and many other ES6 features. Let’s install the four Babel modules.

Let’s also install Nodemon. Nodemon is a helpful utility that restarts your app automatically when file changes are detected.

Add the following to your API’s package.json file.

The "babel" should be on the same level as "name", "dependencies", "license", etc.

The package.json should have "scripts" by default. Add a command to start the app with Nodemon that watches for file changes.

On the Terminal, type npm run watch:dev, and the API app should run.

You can add this before or after "watch:dev" inside the "scripts".

If you type npm run build, you should have a build folder generated for you at the root of your project folder.

There might be situations where you would need to delete all the files inside the generated build folder before you generate a new one. The rm -rf is a Linux command that will remove files recursively. Or, you can just manually delete the build folder yourself.

This command will start the app for a production environment. This means that the files to run are in the build folder, not the files in the server folder.

Sidenote: This specific command might change depending on your production setup. Personally, I use Nodemon or PM2 during Development on my local machine. But I would use PM2 for Production. So this "start" script might be "start": "pm2 start ./build/server.js -i max". But PM2 and other server configurations are beyond the scope of this topic. This is just an FYI.

We might not want to watch all file changes. For example, you might not need your app to keep restarting for changes on test files. What we need is nodemonConfig.

In your package.json, add this Nodemon configuration.

There you have it! You can customize your "script" commands and add more as you see fit. For more information, please go to Babeljs.io